23 – 25, 2021. This event was organized by KlM-International and hosted by the Danish Münsterländer Klub (DMK). Dietrich Berning (President KlM-I) and Rune Riishøj (President DMK) were in charge of the tests. 15 dogs from four nations took part in this international selective breeding test, eight dogs in the elite test and seven dogs in the B-variation of the test. This strong participation in Corona times is an indication that international cooperation on behalf of our Kleine Münsterlander is progressing very well.

The weekend in Denmark began on Thursday with a Breed Show, which had to be moved indoors because of the rainy and stormy autumn weather. The breed show results of the 18 dogs presented showed that the Standard for the Kleiner Münsterländer is being achieved internationally at a very high level. 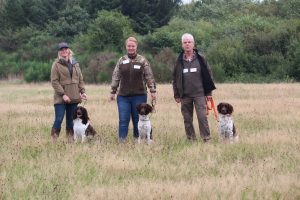 The best-looking females of the IMP 2021 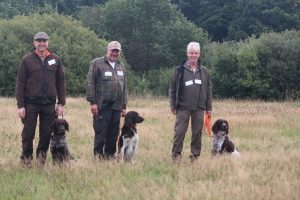 The best-looking males of the IMP 2021

On Friday all groups went into the field. Especially the German participants were impressed by the spacious hunting conditions on the Danish mainland. Here the dogs could show that they were able to search their assigned area systematically, while taking advantage of the wind conditions. No roads as far as you could see! Unfortunately, the weather had not improved, so that it was not easy to find feathered game in the test areas, which under normal circumstances would have been very well stocked with game. But even this small obstacle was mastered by our Kleine Münsterländer with bravura, and in the end, they were all able to demonstrate their skills and successfully complete the first day of the test. 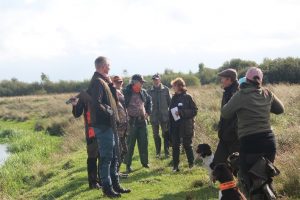 In the evening, energized by the experiences of the day, everyone enjoyed a cozy get-together with typical Danish food. Some felt so comfortable in the Danish “hyggelichkeit” that the evening lasted longer than expected.

For the second day of the test on Saturday, the weather gods were kind and spoiled us with a bright autumn day. For the coming forest and water work a military area was at our disposal. Again, as on the previous two days, our Danish hosts had done an excellent job of organizing the event. The water was demanding, but most of the dogs were able to successfully master the test at the water with – at least for the German dogs – unfamiliar game, since teal (which may be hunted in Denmark) were used for the blind retrieve work.

Nevertheless, there was one small disappointment: In Denmark the work behind the live duck is prohibited by law. Therefore, the subject, which is essential for the evaluation of natural abilities, could not be tested. 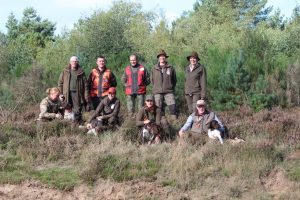 Group 3, IMP-B, after the forest work 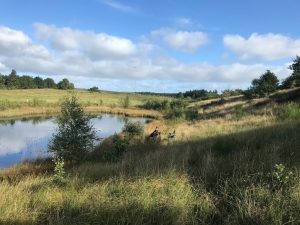 We spent the successful conclusion of these wonderful days together with the Danish test participants in the field test “International vinderklasse”. After a festive dinner, the President of DMK, Rune Riishøj, honored the German-Danish friendship in a moving speech and presented the President with a custom-made flag with the KlM-I logo for the upcoming international tests.

Afterwards Dietrich Berning, the President of KlM-I, conducted the awards ceremony. 7 teams were successful in the IMP-A and 3 teams passed the IMP-B.

The President thanked the organizers of these successful test days, the numerous helpers and field marshals, as well as the Danish and German judges, but especially Rune Riishøj, Peter Jürgensen and Peter Katholm for their tireless efforts, which made the “Danish Days” an unforgettable experience.

He also thanked the sponsors, first and foremost Christa Müller, who donated the prizes for the best dogs (“Suchensieger”) in the name of her late husband Wulf Dietrich Müller. Wulf Dietrich Müller had been very committed to German-Danish cooperation during his time as Chairman and later as Honorary Chairman of the Landesgruppe Schleswig-Holstein. 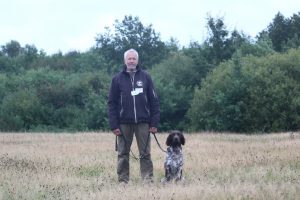 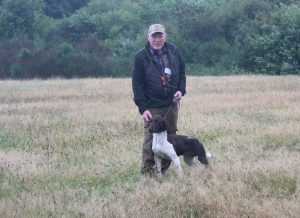 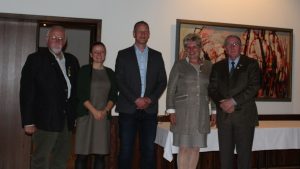 After the official part, there was a proper celebration in the test headquarters which further deepened German-Danish friendship. Until late into the night, Danish, German, Dutch, Swedish and Swiss dog handlers discussed country-specific hunting customs and the resulting differences in dog training and shared many other valuable experiences with each other. One thing is certain: the Kleiner Münsterländer binds people together across national borders, makes for interesting conversations, as all participants share an unbridled passion for hunting with these wonderful dogs.

For this reason alone, the work of KlM-International is so valuable. Despite all the differences in hunting traditions, we are united by the concept of performance in the training and testing of our dogs.

We at KlM-I hope that such unique experiences, regardless in which member country, will always provide wonderful memories in the spirit of “under the flag of KlM-I”.

International Münsterländer Test A and B 2021 in Grindsted_2